Giants of the Atlantic Valleys

Among the Atlantic valleys live a few races of giants, some of flesh and blood, others of wood and fiber, some living and some actually living.

As a rule, most of these elegant beasts vary between 10 and 20 meters, and perform feats of impressive magnitudes:

…from dives of 2000 meters – through the evanescent remains of the surface’s light tracing their choreographed fights in the depths, embraced by unimaginable pressure (and not only that psychological nature)

… to the circumnavigations through constantly changing passages, chasing sunrises and sunsets, from port to port, through the paradisiacal beaches of the Caribbean, and the ice mazes of the Arctic.

Sporadically, rare pygmy species also appear proving that giants are not simply measured in height but by the greatness of their feats, as this subspecies often dwarf often the expectable as they venture into the treacherous oceanic plains, mirrored in blue, which, through the apparent reflection of calmness, hide swampy storms that rise violently, challenging the structures on which their own lives depend. 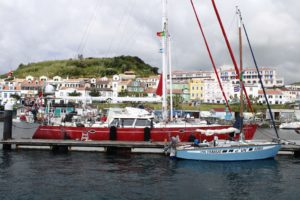 It was during one of our recent and routine circuits around Horta’s bay that we found some of these specimens: small sailboats of 5 and 6 meters, that dare to challenge the oceans. As we approached one – the last one that had chosen Horta as a shelter – we were greeted by a solitary Russian.  Sergei, a man in his 60s, that just finished crossing the Atlantic in 45 days, in the 5 meters Loopan, having arrived at Horta with some technical problems, justifying the necessity of our initial interaction. 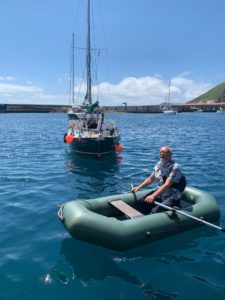 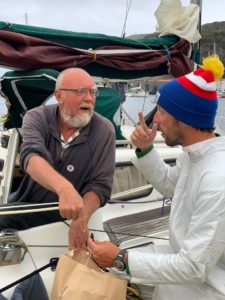 Looking back, all this interaction with the Sergei was extremely fun, since the language barrier ended up manifesting itself as a pretext for frequent charade sessions, which ended up turning any routine activity, such as the gathering of food lists, into fun periods of time. And more! In most of the visits that took place after these playful-labor moments, Sergei made the point of rewarding us with personalized rope keychains and some old Russian rubles, which value, in this case, was entirely derived from the mere gesture of genuine gratitude.

Although he did not master English, Sergei showed amazing talent in the art of communication through his exceptional gestural expressiveness and affability with which, during all this period, he interacted with everyone with whom he crossed – having even, when he finally could disembark and come ashore, lent his dinghy to the kids playing at the Port of Santa Cruz, so that they could have fun rowing or making exuberant acrobatic jumps into the water, while he took care of his affairs.

The reality is this sequence of interactions with Sergei has once again demonstrated the magnanimity of these rare oceanic little giants, confirming that often “the best things come in small packages”. In this particular case, this small 5-meter giant, Loopan, who dares to walk through the mountain ranges merged with the deep blue that together separate the bottom of the ocean from its body just like the reflection of the sun separates the oceans from the skies- brought to Horta, raped in fiber and entangled cables, a beautiful and minimalist portrait of life in freedom, only surpassed by the enormous sympathy of this visitor.

To visit this webpage, you must have legal drinking age

Do you have legal drinking age?