Pelican of London and Thor Heyerdahl

A lot of people stereotypically see sailors as drunk festive people, with festive songs such as “what shall we do with a drunken sailor” materializing that idea… and the reality is that we’ve been dealing with drunken sailors all our lives – being a bar and all. However, with the corona epidemic, we soon realized that this year it would not be business as usual: there was an armada of undersupplied sober sailors heading our way and that was in fact what was alarming us.

The truth is that our experience supplying sailor was, at the time, practically non-existent, but not completely, since, during the 50s and 60s, Grandpa Peter had spent a lot of hours on his little wooden paddle receiving the first sailboats that then arrived at Horta: bringing them water, food and medicine – as it seems, we went back in time.

The school ships Pelican of London and Thor Heyerdahl were some of the first arrivals to Horta, during the epidemic, contacting us regarding the recently implemented restrictions and asking for provisions. Being school ships, I ignorantly associated it to vessels filled with kids, and even joked around by saying: “well, lucky for us little kids are the closest thing to drunken sailors that we could get, as both babble, puke and can’t properly stand on their feet  – so maybe, after all,  some of our bar expertise will facilitate this transition …”

Guess what: surprise, surprise – I was completely wrong. 😑 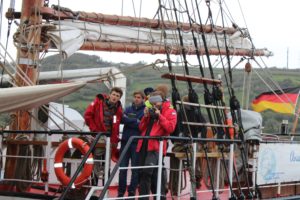 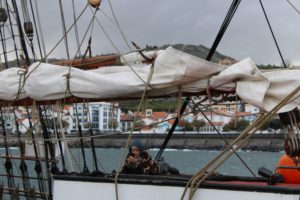 As it seems, they are not kids at all! These school ships are mostly constituted by teenagers and young adults, with most people I know paling in comparison even with the youngest of these lads, who actually know what they are doing. So, I came to the hard realization that, instead of starting small, helping a few small yachts here and there, we had started with two big ships, with a small battalion of hungry sailors to feed. That was smart, I guess.

When we realized, our tables had been replaced by bags of potatoes, the chairs by overpacked boxes with meat, fish and vegetables, and in every corner of the room, there were mounts of toilet paper – that for some reason that only God knows, had become extremely valuable and hoarded by the truckload.

… and there were we, the small Peter’s crew making one of our first shipments to these massive ships, that needed supplies for at least one more month. They could have been a small army that we probably wouldn’t have noticed any difference. 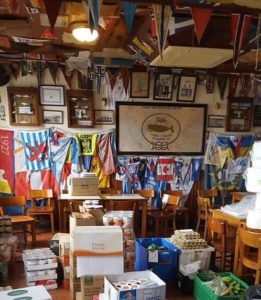 In the end, we learned a lot by meeting some of these young adventurers, which depict the current sailing community much more accurately then the stereotypical drunk version. We were actually glad that they were some of the first arrivals, not only because they represent a much-needed example of essential educational reform –  stimulating both curiosity and bravery as fundamental requirements to proper, action-oriented, human development – but mostly because they offered us boxes filled with delicious candies. 🤩 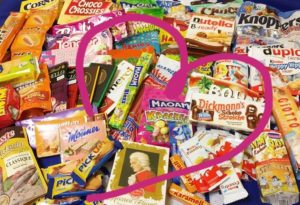 To visit this webpage, you must have legal drinking age

Do you have legal drinking age?